I have to confess that prior to going to Prague i had done absolutely no research on the city…whatsoever! Homestly. I did some minimal research on gluten free eating and that threw up a few surprises, namely that the 100% gluten free restaurant that I had been intending on visiting was no longer there. It has indeed passed on to another life, and that life is to be found in London. The owner is ‘in residence’, taken over, moved to WagFree’s sight in Brixton Market, which is understandably fantastic when you are in London but what will us gluten free folk do in Prague?

I almost expected to see fairies 🙂

The first thing that sprung to my mind was to obtain a gluten free Czech travel card, obtainable from here. Despite having printed a couple off I never had to use it. As czec is so different to any language I speak I also made a point of looking up the words for:
Gluten – lepek
Gluten free – bez lepku
Contains gluten – obsahuje lepek
I also looked up the Czech coeliac society who were able to advise about where to eat. While giving out some very useful information, they also pointed out that eating out in the Czech Republic is generally very hard as it is so gluten centred!
http://celiac.cz/default.aspx?category=2
http://www.celiak.cz/
Hotel Residence Agnes
MrG very kindly asked if the hotel were able to provide gf bread, they promptyly wrote back to say that this was not a problem. On arrival at the hotel we were warmly welcomed and given an introduction to Prague as well as the hotel. They also confirmed that they had gluten free bread for me and if I ever wanted a snack of gluten free bread and jam it was not a problem at all! I think this is the first time that I have been given this option. 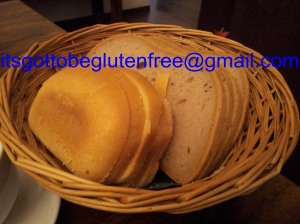 Gluten Free Bread For Me!

Indeed the next morning we went down to breakfast and given a warm tour of the breakfast items available. While they were unsure as to what would be suitable for me nothing seemed like a problem. There was a good choice of naturally gluten free things available. When I arrived at my table there I had my very own gluten free basket containing two types of gluten free bread. Yay!
http://www.residenceagnes.cz/
King Solomon’s Restaurant
I really struggled to find things that were both gluten free and pork free. This is a kosher restaurant in the Jewish Quarter who are also able to cater for a gluten free diet. Despite intending to eat here, by the time we had finished up in the Jewish Quarter it was still a bit too early to eat lunch. None the less this is a viable option.
http://www.kosher.cz/en/
Svjek U Cara 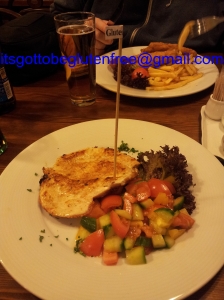 From what I can gather this restaurant froms part of a chain however I still am unsure as to whether all branches in the chain offer gluten free options or whether this is a one off. On arriving here we immediately saw signs in the window stating they offered a gluten free menu. Fantastic.

I had no problems obtaining a gluten free menu as the staff spoke English. Despite this being a gluten free menu I really struggled to find something I wanted to eat but I think that was more about me than the gluten free offerings on the menu. In the end I opted for the chicken breast and vegetables. For dessert MrG was bamboozled into getting a gluten free dessert so that I could try two! Shameful On my part but it had to be done! Sadly, they had sold out of fruit dumplings, something I am still curious to try and now it is on my things to make list. We opted for a pancake with marmalade and an apple streudal. Both tasted good. The apple streudal more like a pancake filled with a spice apple filling than the very crisp apple strudal I had eaten in Florence. It was a nice way to finish the meal.

GF is On the Menu

Situated opposite the Astronomical clock, this restaurant offers a prime position for people watching while eating. While walking past we decided to stop here for a coffee a quick browse of the menu revealed that gluten free items had been identified with crossed grain symbols. The menu was fairly comprehensive and pretty much catered to most tastes. I opted for the parmesan risotto with pesto which was very good and satisfied my urge for something hot and uncomplicated.

https://www.hoteluprince.com/restaurant-and-banquet-rooms
Random finds
This includes a couple of restaurants that labelled their menu with items that were gluten free, while I did not experience food first hand I thought it was good to note it down as information regarding gluten free Prague is pretty sparce.
Lo Veg (on the walk down from the castle still on the hill)
Specialises in vegan food. Gluten free items included Thai Coconut Curry with rice amoung other things.
http://www.loveg.cz/index-5.html
Triton Restaurant

Included a good range of things including dessert.

It Definitely Pays To Look Around 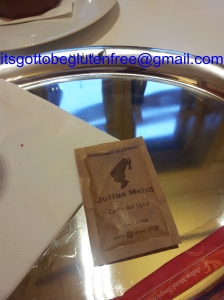 The three story food hall contains lots of naturally gluten free food. In addition it is possible to buy rice, polenta, rice noodles, corn pasta, gluten free cereal. I didn’t find bread here but I wasn’t trying to buy any so did not look too hard. Nonetheless I am fairly sure it would be here. The staff were extremely helpful. 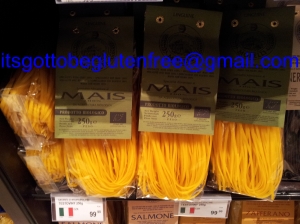 Prague Airport
Before passport control I saw one place that sold salad boxes.
After passport control food is minimal. The height of excitement was being able to purchase some macarons. I had taken along some Be Free Foods Wraps with me as they travel extremely well and don’t fall apart, so had that as a marmalade sandwich. It was only when we had reached the the gate that I found a smart looking coffee shop that sold salad boxes. By this point I had already eaten. 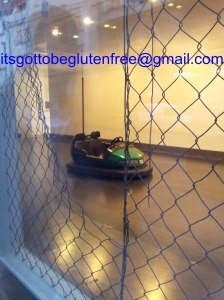 One response to “36 Hours in: Prague”

Can’t find what you are looking for? Try here… 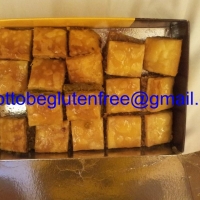 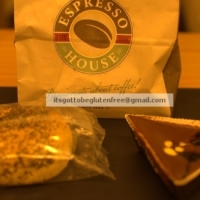 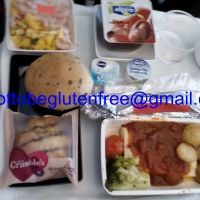